If you’re anything like me, waking up on Thanksgiving morning brings to mind a flood of memories to truly appreciate.  Maybe its the intoxicating smell of turkey (and the tryptophan will make you want a nap)  mixed with pumpkin pie, or the anticipation of Christmas that entices us to slow down and reflect on what is truly important in our hectic lives.  For me, of course, my delightful family is always a “sweet spot” when I come home from work each day.

All 5 to be thankful for!

Enjoy your holiday….and by the way if you get heartburn, I wrote last year about the inevitable!  Click on the link below.

Here’s something you never want your doctor to say–interesting!  That usually means something is bad for you, but good for a teaching case.  Last week was no exception.

I won’t mention any names for privacy, but this teenage boy was having problems.  Everytime his lung capacity dropped below 60%, here came the steroids.  No cough, no wheeze, no attack….just steroids. What’s going on? Examination revealed the answer.  This patient has pectus excavatum (see below) that reduced his lung function because of a MECHANICAL problem, not asthma per se.

One of many variations of pectus

To determine whether pulmonary function decreases as a function of severity of pectus excavatum, and whether reduced function is restrictive or obstructive in nature in a large multicenter study.

Among patients presenting for surgical repair of pectus excavatum, those with more severe deformities have a much higher likelihood of decreased pulmonary function with a restrictive pulmonary pattern.

Do you want pictures?  In English please!  The case report below means that if you have pectus excavatum, with any stress on the lungs (carrying weights, running, an infection) you are likely to experience a greater drop in your lung function than patients without the deformity. 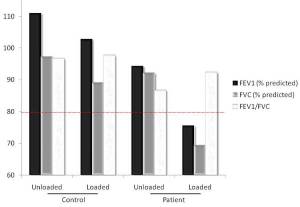 Pectus on the right with lower lung function.

Thus, our “mystery” patient is solved.  Because of the pectus deformity, he is more at risk for a low FEV1 with any cold or upper respiratory illness. And now you know the rest of the story….