I recently found an article on the accuracy of #medical information on #Facebook–it was 85% (wrong that is).  With this much misinformation at our fingertips, no wonder medical advances seem to be muted…obesity, cost of medical care, gun violence, heart disease. If you’re relying on the internet for your medical information, perhaps this link on how to counteract medical-misinformation might be helpful.

Take a survey for me at the end of the article: I want to know your thoughts.

But not all media information is “fake news”.  Here’s an article published in the #Tulsa World, last year 2018 about “non-allergic” vasomotor #rhinitis that is spot on. Probably the most surprised look I get when testing patients for allergy is when all testing is negative. Doesn’t everyone in Oklahoma have allergies? This “media news” is worth re-posting and I commend the Tulsa World for their accurate information.

Dear Doctor: I have been plagued with clear nasal drip for a couple of years. The constant dripping is most prevalent when I eat, lift something heavy or even just get up from a chair. I have tried various antihistamines and nasal sprays. What else is there?

Dear Reader: First, let’s look at the root of your problem: rhinitis, the #inflammation of the mucous membranes within the nose. This common condition, which can cause nasal congestion, runny nose and post-nasal drip (the symptom you describe), affects 10 percent to 40 percent of the population in industrialized countries.

Many doctors, including myself, previously referred to the condition as autonomic rhinitis because of its connection to the autonomic nerves that go the nose. These nerves can become hyper-responsive, leading to nasal congestion and runny nose upon exposure to environmental stimuli, such as changes in temperature, especially cold temperatures. Autonomic nerves can also cause nasal symptoms when a person eats spicy foods, consumes hot foods or drinks, exercises, lifts heavy objects or simply changes position.

But the autonomic nerves may not be the only factor at play. An inflammatory response can also occur with nonallergic rhinitis, caused by white blood cells that become active in response to chemical irritants like cigarette smoke, perfume, cologne, scented products and pollution. This inflammatory response can compound the autonomic response; it could also potentially be the root cause of your post-nasal drip. 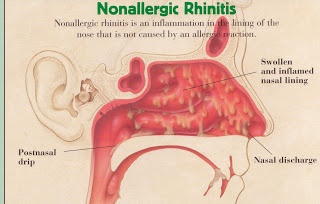 The first aspect of treating nonallergic rhinitis is to rule out an #allergy or specific environmental stimulus. The second step is to assess the use of nasal decongestants, such as Afrin or Sudafed. Chronic use of these medications by tablet or spray can cause a rebound of congestion when the medication is stopped. Heartburn, or acid reflux, also should be addressed because it can lead to rhinitis as well.

The oral antihistamines often used to treat allergies may not be helpful against nonallergic rhinitis, because allergies aren’t the cause. Nasal antihistamines have shown benefit in treating nonallergic rhinitis, however. So too have nasal steroids, which decrease the inflammation in the nose. The latter drugs need to be used for more than a week to show an effect, however, and some doctors are concerned about longer-term use.

It seems likely you have an autonomic component to your symptoms. If so, talk to your doctor about #ipratropium nasal spray (Atrovent). It blocks nerve receptors in the nose that are part of the autonomic nervous system. Your doctor may recommend its use before eating, before heavy exercise and, if necessary, before exposure to cold and dry conditions. If that doesn’t work, a nasal steroid and possibly a nasal histamine are other options.

Some patients with nonallergic rhinitis may eventually develop allergies and even asthma, so please follow up with your doctor if your symptoms worsen.

Give me your feedback:

What do you like/dislike about this blog page? Any subjects you would like more information about?

Where Can You Find Me?

Nothing to Sneeze At…..

Your health knowledge is your life power