Jane (fictitious name, of course because of HIPPA regulations) is now 56 years old and just last year was diagnosed with #asthma. She thought, “no big deal, there are plenty of inhalers for me to use so I don’t wheeze”.  Little did she know that 2019 would put her in the hospital 3 times and multiple visits to the emergency room because of asthma. In fact, she even missed her grandson’s graduation from kindergarten because of her asthma. Now if that doesn’t motivate you, nothing will!

Asthma has actually been around for many decades with the first medical journal report of asthma in the late 1860’s. We just didn’t know how to treat asthma at that time. The earliest reports of asthma recommended treating  patients with all types of potions, including strychnine. Yes, indeed that would make you feel better! Just kidding, but it’s true. Nothing much happened with asthma treatment until along came Adrenalin or epinephrine. (1960’s) Now, you’re probably aware of EpiPens and Auvi-Q devices, but imagine having to take an adrenaline shot every time you wanted to go outside or run at school. Sounds almost impossible to keep up with and it was.  Epinephrine worked, but you just couldn’t take it all the time and still be a normal person.

Fortunately, medical science didn’t give up on the mechanism of what causes asthma, and this soon led to the development of albuterol or bronchodilators. (1970’s) Patients still cling to their “asthma inhalers” for fear of having an asthma attack and no inhaler. But asthma is so much more than your airways closing off and making you cough & wheeze until you finally give in and go to the hospital.  Scientists discovered the reason your airways squeeze together like a boa constrictor is because of inflammation. What is inflammation? When you’re exposed to allergy, infection, or even strong odors, the body reacts by trying to heal the wound. Ever cut your skin and notice how much swelling and redness appears while your body repairs the cut? Same thing happens when the lungs are damaged by pollen or infection, only now the swelling and redness never go away, resulting in the basis of what we call asthma. Here’s a few pictures to show you what I mean: 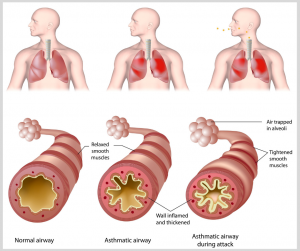 So if the lung is swelling and  closing off like what happens in asthma, why can’t we stop it? We tried, and did pretty well in the 80’s & 90’s with inhaled corticosteroids, but ran into some asthma severity that just wouldn’t bow to the steroids used. Plus, who do you know that wants to take an inhaler twice daily everyday for the rest of your life? Even oral steroids don’t cure all asthma, even though they work like a charm. The problem with steroids is you “can pay me now, or you can pay me later!” Oral steroids in particular will cause osteoporosis, eye cataracts, decreased height and a myriad of other long-term problems. If you’ll look at the picture above, do you see all the cells and small molecules surrounding the airway? These are the messengers that cause the inflammation and swell up the airways to begin with after injury or insult. Now wouldn’t it be nice to suppress this activity and come closer to curing asthma?

In come the biologicals and we’ve reached the new age of asthma therapy. Granted, biologicals aren’t for everyone, but here are some benefits I’ve noticed in the last several years since these molecules have been approved by the FDA for treatment of asthma.

The bottom line is biologicals can reduce your asthma exacerbations (trips to the ER, Urgent care, or unscheduled office visits) while at the same time, reduce your dependence on medications, and improve your quality of life at the same time. Their initial cost is very expensive, but as I’ve mentioned, most of the companies that sell biologicals, have some great patient assistance that will reduce your cost to almost zero.

But as always, don’t take my word for it–national “experts” in the use of biologicals have left their fingerprints on this new form of asthma therapy below. Don’t be left behind with outdated asthma treatment. Give us a call at 918-495-2636.